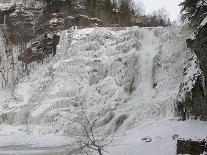 Image: The falls a block or so down the street from us.

An e-mail from the publisher: the production team has received the manuscript for Visits With Angels. We have been assigned a design consultant - which we do not need since Diana has done all the graphics and formatting. Wrote Diana and suggested she call our design consultant and production team to tell them the book is already finished. Diana was not pleased. Wrote my author representative explaining the situation, and asked if we could speed things up a bit.

Meanwhile I continue to practice the Liszt/Busoni version of Liszt’s masterpiece, the Mephisto Waltz, all thirty three pages of it. It has been firmly memorized for weeks now. Last week it took me almost two hours to go through it from beginning to end; today it took about thirty-five minutes. I must find the discipline to practice very slowly for another month or so, or I will have a very big tangle on my hands later. It will not be a very difficult piece to play, as long as I put the slow work in now ... Both Liszt and Busoni were incredible pianists; basically Busoni took Liszt’s version and made it more difficult ... Just by virtue of the fact that I am learning this piece, I am also learning Busoni’s hand and arm position(s) - which is exciting in itself. Both men had such an excess of technique, that piano virtuosity was mere fun, the impossible was a joy to them - and an intoxication that I share. My fingers and hands enjoy playing this piece, because of its difficulty, because of the sheer joy of playing that was written right into it by both great pianists before me. How fortunate we are to have these scores, that they were not lost, perhaps forgotten on a shelf somewhere...

It really is an extraordinary piece ...

Only two more pages to memorize of Ravel’s Jeu D’Eau. I must say that I find portions of the Ravel very difficult to memorize. The cats love it when I practice the Ravel, and they hate several loud sections of the Liszt. When I play those pages of the Liszt, the cats run around the house chasing each other, or up and down the stairs, sometimes intentionally knocking things over. They know the Liszt so well by now, that today Sergei waited and sauntered into the living room half way through the last page of the piece, wanting to be fed ...

It is snowing again tonight - we are supposed to receive three to five inches overnight. Just a beautiful, fluffy snow ... I think I will call Diana - and then practice the Ravel. The sounds of the Ravel, in the night’s silence, with snow falling gently outside the windows ... Jeu D’Eau, the water playing ... Whereas here in Ithaca, at the moment - all the water is frozen, even the waterfalls are iced over...

12:20 a.m.
Went downstairs and gazed out the windows, watching the snow falling, in the lamplight, steadily covering the bare branches of trees, outlining the firs and hollies ... The back gardens suddenly a white fairyland in the darkness of the night, a bit of winter magic ... the world silent, so very silent ... it is the sort of profound silence that often surrounds the Mystical, the miraculous - the Holy ... As the snow proceeds in its quiet occupation, adding new layers to the earth as the world sleeps ... Transforming the ordinary into something new, something unexpectedly beautiful ... As though our vision has cleared, seen Truth ...

Our new production team for Visits With Angels e-mailed that there were problems with the manuscript and that the first page of the book must begin on the left page. I sent the message onward to Diana.

A message from Diana, with her response to our new team designer:

Thank you so much for your consideration towards my design, in which the first double-page spread by necessity imposes page one on the left-hand side. You are absolutely right that the addition of a blank page, to force page one to the right, would disrupt the design of the entire book.

Here's my design strategy: I start each section with a right-hand title page and I don't number the title pages. That's why page one starts on the left not the right.

Since the printer is working with a PDF, not an InDesign file, the rationale escapes me for why they say that page one has to be on the right. I realize that this puts you into a possibly difficult position since technically our book breaks the printer's rule, so I am willing to troubleshoot it with you by doing something like adding a number in white - which would not show up in print - to the title page, if need be; I'm not sure if this would satisfy their rule, tho', since page one would still show up on the left-hand side. Tho' I am absolutely open to little tricks like this (adding invisible white numbers to title pages) - I am NOT willing to completely re-design this book in order to force page one onto the right-hand side.

Earlier this month, I emailed Haley and Adalee about this "page one on the right side" issue that was raised at that time by Haley. I will include my email to her as well as her reply, below.

Author Laurie Conrad and I have published two other books with Authorhouse. Originally we worked with Eli Richart, who has a lot of knowledge of pre-press and was able to negotiate with the printer on our behalf for technical considerations that would allow Authorhouse to support our design. Eli still works for Authorhouse, and will likely remember working with Laurie and I, so maybe he would be a good person to confer with about this issue.

Let me know what you discover and how this works out. All I ask is that no alterations be made to my design.

Poor Diana; wrote Diana and thanked her for being so restrained in her response to the new design team we were recently assigned. And I sincerely hope this is the end our troubles with the publisher.

A short message from our new designer for Visits With Angels: “ I spoke with Adalee and she said it was fine if the first page started on the left hand page.” Her message ends with: “Let me know if you want to move ahead with this file, or if you’d rather renumber all the pages and send a new pdf.” I can only imagine Diana’s response to that last sentence; sent to the message on to Diana.

Poor Diana and poor Visits With Angels - it seems we all seem to revisit the same old ground over and over again.

Ithaca is supposed to receive up to twelve inches of snow by tomorrow night, starting at four in the morning; have already arranged snow shoveling teams with the neighbors.

Since the Liszt and Ravel are now firmly memorized, decided tonight to add on a Debussy Prelude and possibly L’Isle Joyeuse. I will try to find the score of L’Isle Joyeuse tonight, and begin reading through it. It seems to me that I had quickly memorized it some years ago, before illness and injury forced me into temporary retirement. Which means I probably will not remember a note of it ...

The life of a pianist - all those notes in our head, often many thousands of them, for every concert. And to be a concert pianist, we have to know the pieces we play well enough that we could write down every note if asked to. In a concert situation, we cannot solely rely on muscle memory, we have to know the notes, by name, by position on the keyboard, by their position in the key and chord ... I have to be able to recreate the score in my mind, visualize it if necessary, every page, every phrase - every note ... The price of Beauty ...
Top
Post Reply
1 post • Page 1 of 1