The Cat and Our Lady or Supernatural Fragrances 101

The Cat and Our Lady or Supernatural Fragrances 101

The Desert Fathers and Our Lady of Guadalupe pay Diana a Visit or Supernatural Fragrances 101: A Mystic’s Journal Entry: February 1, 2010 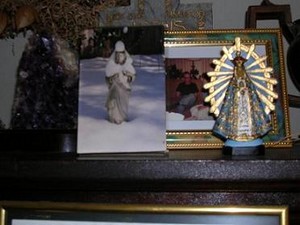 Diana and I sent this series of e-mails back and forth a few weeks ago. She had taken a short vacation from formatting Visits With Angels, the section on the supernatural fragrances we have been experiencing here in Ithaca:

Tuesday of last week I attended the funeral of the mother of one of my oldest friends here in Dallas. I'd only met her mother once and the woman was considered very unloving by all four of her children. The funeral was in a Catholic church where there was a full mass. I said all the prayers by heart (I still remember them after all these years) and I sincerely prayed for my friend's mother to be forgiven for whatever her sins were that made her so mean to her children. From the church that day, I brought home a holy card -and I had brought my prayer beads with me.

That's all that came into my house with me from this funeral... except... ever since then, there has been a scent of frankincense in the room in my house where I have a large statue of Our Lady of Guadalupe, where I hang my prayer beads on her hands and where I put the holy card of Jesus from the funeral.

Everyday since then, I catch whiffs of frankincense -just in that room! Other people cannot smell it. It went away the day I burned some potatoes... but then it came back! No, I haven't burned any incense of my own!!

I've asked the Divine Presences - whoever they are - for their help... and I've thanked them sincerely
for being here. Should I do anything else?!

I think it is because you are working on the new book, Visits With Angels - and either Our Lady and/or the Desert Fathers are paying you a visit. They are telling you that they are there with you. The first time I experienced a supernatural fragrance was when I was doing a tv show on Our Lady's appearances in Naju, Korea. As I was finishing it, the edit suite suddenly filled with the supernatural fragrance of myrrh. M. was aware of the fragrance when she came to pick me up at the studio - the scent was still lingering on the tapes I asked her to carry to the car. The Higher Beings are always pleased when we try to tell the world about them, and sometimes they make their Presence known to us as a sign that They are pleased.

It also sounds like a "reward" for praying so selflessly and with such compassion for that poor woman, Our Lady’s way of saying that She is very pleased with you. When I put those Journal entries on supernatural fragrances online - the ones you are now starting to format - many people who read them said they also received the fragrances!! Luckily for humanity, Love, Light and Divinity move through our universe as easily as - or more easily than - evil and the negative emotions and thoughts.

Thank you for your comments about the supernatural fragrance in my room. A curious thing happened today.

Since the scent only started after that funeral I went to, I suddenly had a worried feeling that it might be the mother of my friend, the woman I prayed for at her funeral. According to her children, she wasn't very nice - so I was not comfortable thinking it might be her spirit in my house. One thing I remember my friend telling me about her mother was that she didn't like animals and didn't allow them to have any pets when they were children.

This morning, my cat came in the house - which rarely happens since he's an outdoor cat. When he came in, I met him in the doorway of the room where the scent is (and the large statue of Our Lady of Guadalupe). The second I hugged the cat, the scent made itself known... just for that moment!!

So I know now that the spirit isn't the woman who died. Whoever it is really appreciated the cat and the little blast of love between the cat and I this morning.

These were not the only supernatural scents Diana experienced in the last few months. They began after she started work on the new book, and after she put a statue of Our Lady of Guadalupe in her meditation room. The first fragrances were after she returned from visiting someone she knew who is in prison. In that instance Diana’s heart was completely open with love and compassion for someone elses suffering.

I suspect that many of us please God more than we suspect, and in ordinary, small ways ...
Top
Post Reply
1 post • Page 1 of 1